The Jericho Greenbelt Beautification Demonstration Project along Browns Trace continues this year, amidst many challenges. The poor sediment and harsh environemnt of the greenbelt took its tool on some of the plants, while town contracted lawn mowing took down others. Of particular concern are tree strikes by the contractors doing serious damage to town trees on the green and the greenbelt, in some cases nearly girdling the trees.
Thank You to all who wrote letters to the selectboard voicing support to allow volunteers to continue to put their own time and money and donations of plants, into growing (mostly native) perennials on a few sections of the greenbelt on Browns Trace.
Special thanks for many plant donations for the project again this year by Katrina Allen.
Also, thanks to Bryant Pleiss for joining me in a purchase (from the Intervale Conservation Nursery) of a combined ten Aronia Berry (Aronia melanocarpa) 4 foot tall plants. We planted them along the wood rail on Browns Trace. You can read about this perennial native bush, its beautiful white flowers in spring, brilliant red leaves in fall, and its amazingly healthly fruit (higher antioxidant levels than even blueberries) at https://mail.yahoo.com/d/search/keyword=aronia/messages/ANmptbxwW43HXu0YrgQ2IO2oT70?.src=fp.
I am considering purchasing some wildflower seed mix and clover this fall for filler in between the planted perrenials in a few areas of the Greenbelt. Drop me a line if you are interested in helping with this endeavour. Most of the work with seeds is preparing the area well ahead of the fall seeding.
This is a bed I seeded in our backyard last fall, after having the area covered with cardboard throughout the prior summer. 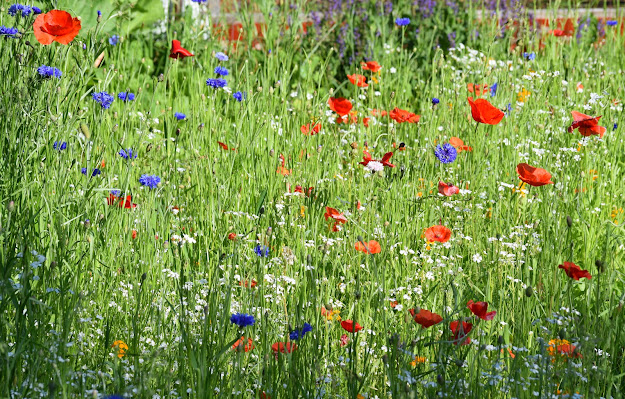 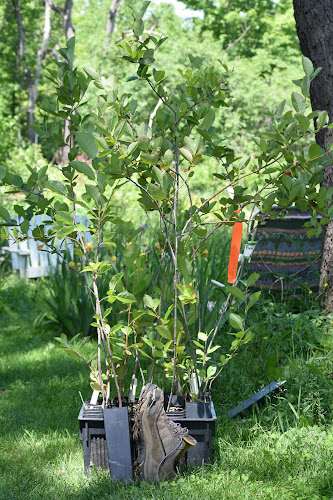 Please also speak for the trees. The town paid for many of the trees planted, and some were donated to the town. Consider offering your thoughts and ideas to the select board members on how to protect our public trees from damage by lawn care contractors. More such damage has occurred since the June 18 meeting with the Selectboard.
View the June 18 Selectboard meeting discussion of agenda item 'Barber Farm Islands and Jericho Center Green Mowing' at 50:21 on  https://archive.org/details/jericho-selectbd-06182020
Damage to one of the Red Maples on the greenbelt near the
junction of Barber Farm Rd and Browns Trace. 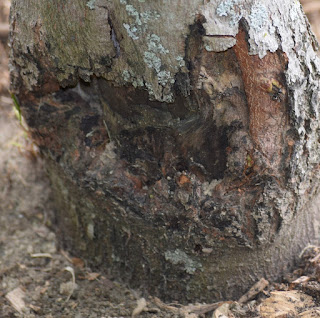 See my letter to the selectboard below.
Hello Jericho Selectboard members, Wayne, Catherine, Tim,
Please consider my comments and request as part of the June 18 Selecboard Agenda item, Barber Farm Islands, and Jericho Center Green Mowing.
I am asking for your town approval for the continuation and care by volunteers, of Jericho’s greenbelt trees and native plantings.
Every day scientists tell us about a rapid decline in nature, in nonhuman life that we are dependent upon. We as landowners in Jericho have the opportunity to make a big difference regarding the loss of habitat that supports the food web of life. This is true within our public landscape as well - including the greenbelt along the sidewalk.
Last year about twenty Jericho residents donated mostly native plants for the greenbelt planting project along portions of Brown Trace in Jericho Center. This project helps demonstrate a diverse native habitat.  By late summer, folks walking by on the sidewalk were expressing their gratitude and pleasure at seeing the beautification of the greenbelt.
This spring many of the plantings are again growing on their own (as they are perennials), and if left in place will bloom this year, a few already have bloomed or are blooming now.
However, the trees on the green and a few on the greenbelt, as well as some of the perennial plantings, continue to experience lawnmower damage. Stakes/string around the trees from last year were removed and the town mgr. has asked that stakes set out around the trees this year, be removed as well.
A vote of support by the selectboard for the greenbelt plantings and for tree protection staking could help determine whether these plants are given a chance to show their mature blooming again this summer, and give the trees a chance at long term survival.
What are some of the town’s concerns?
Judgment as to what looks appealing to the eye.
Some prefer mowed grass, some prefer manicured plantings of annuals, some prefer perennials that do not need to be replanted each year, and that once established reseed, and spread on their own, filling in gaps (over time) that weeds or grass would otherwise consume.
Nationally, commercial interest has advertised and heavily promoted the manicured cut grass look, which offers little if any food to insects including pollinators and requires noisy polluting lawn mowers as well as the expense and effort of mowing.
Scientists have told us of the decreasing population of insects, mammals, and birds due to habitat loss. The consequences for humanity are dire. One out of every three bites of food we humans take need pollinators. Pollinating insects are in sharp decline. Three billion birds have been lost since the 1970s.  The decreasing population list goes on and includes many species not even identified yet.
We as individual landowners may be “nature’s best hope”.  Indeed, we may be their only hope. Each of us can help nature heal. Millions of acres of private land could be enough to turn the tide on the downward trend of nature. This could be achieved if we each do our small part on our own private land and on our municipal landscape.
Reducing the amount of publicly owned greenbelt that is mowed is not a difficult step for us to take here in Jericho. (This  request is to support the current planted areas, not to increase the project scope). In doing so we can reduce noise, air pollution, and reliance on fossil fuels, lower expenses, and gain time for other activities. Such plantings also do a better job than grass at reducing erosion such as seen on Browns Trace just before the triangle greenbelt.
We have been taught (advertising) about lawn and greenbelt aesthetics. We can come to realize the beauty of a diverse healthy landscape with native plants of different heights and different blooming seasons, supporting the web of life. We can decrease our use of manicured nutrient-poor grass and increase the abundance of native plants that support our wildlife.
Shall we increase the abundance of diverse native plants that will support the web of life on which human life depends? The answer will be seen on our greenbelts and other public landscapes, as well as on our own private property.
Please voice and vote your support on June 18 for the continuation of the Jericho volunteer’s efforts to grow and protect from lawnmowers, native plants, and trees in the Jericho Center greenbelt.
View photos of some of the greenbelt blooms from last year @ https://jerichovermont.blogspot.com/2019/10/jericho-ctr-native-perennial-green-belt.html
The following are from plants on the Browns Trace greenbelt this year. 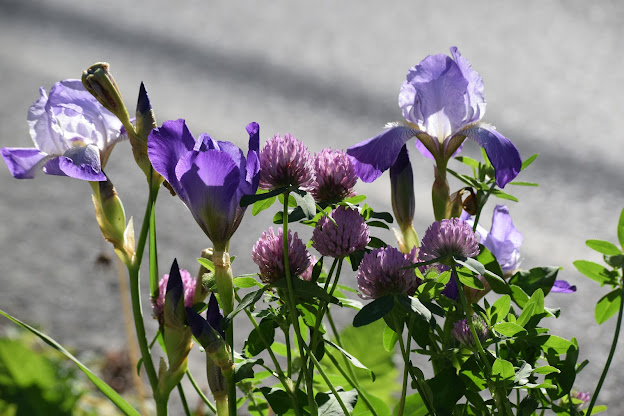 The goal is to plant only perennials native to Vermont. However some non natives have been planted such as the peony. 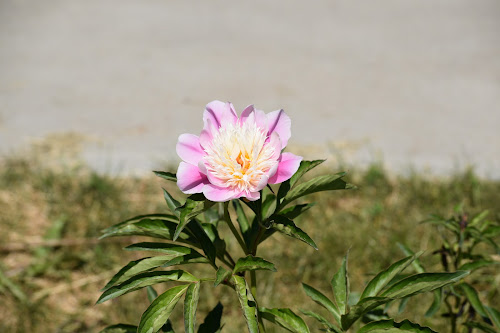 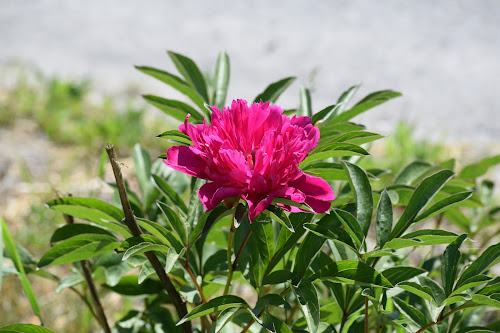 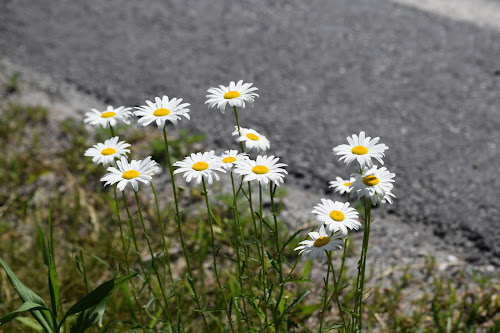 Some plants come on their own and flower nicely. 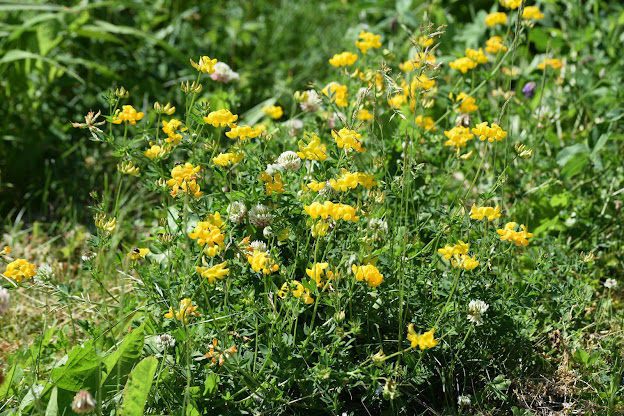 Vetch not only flowers nicely, it also improves the soil nitrogen levels. 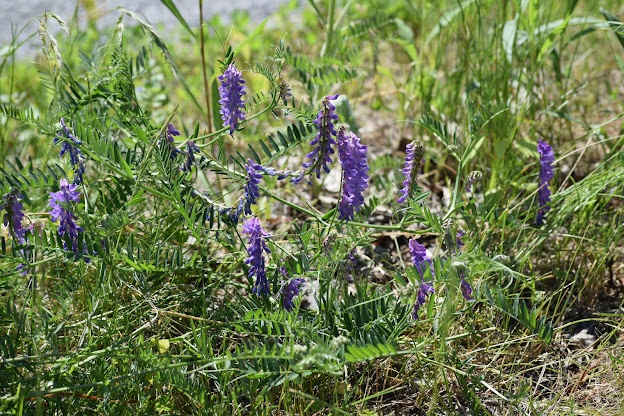 I'm the one w/o mittens. My motto: Laugh, Dream, Try, and Do Good 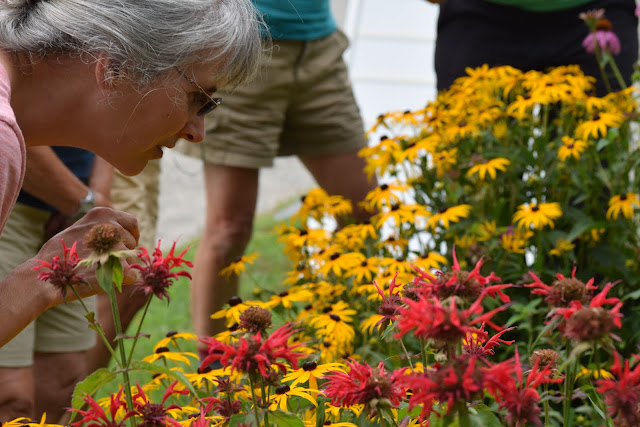 Click on photos below to link to the business web page. 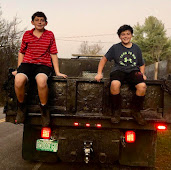 The best VERMONTER Panini in the country!